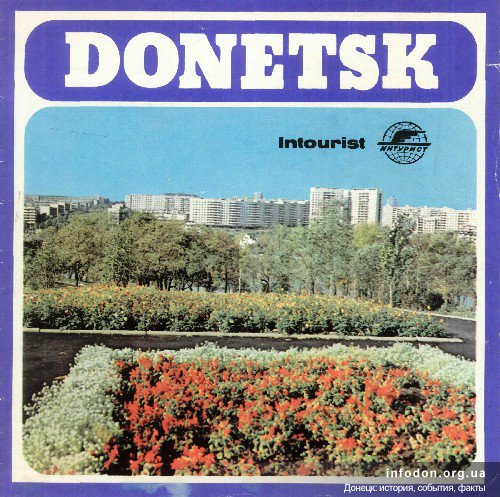 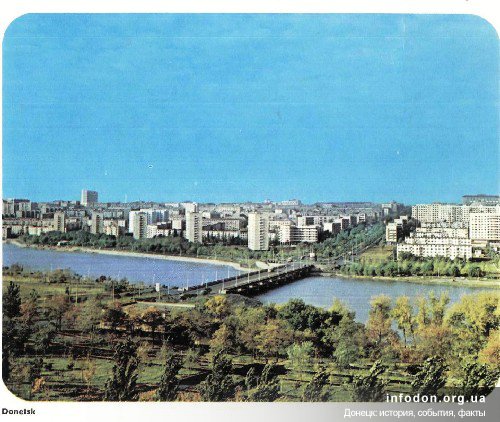 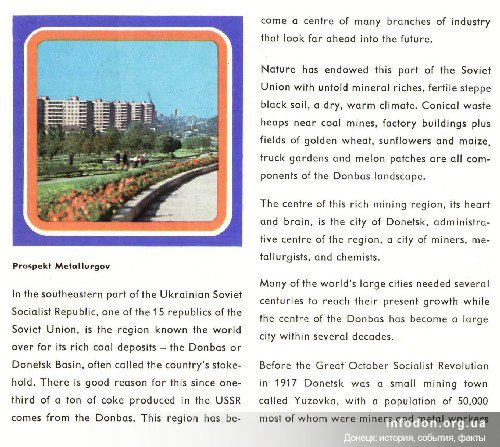 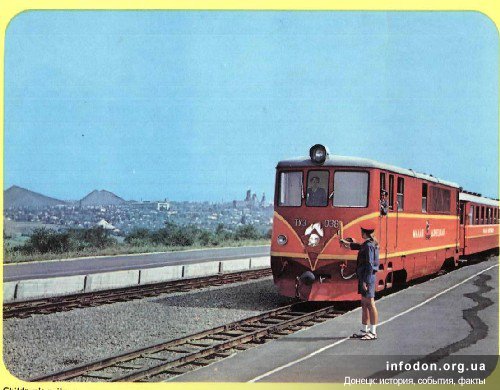 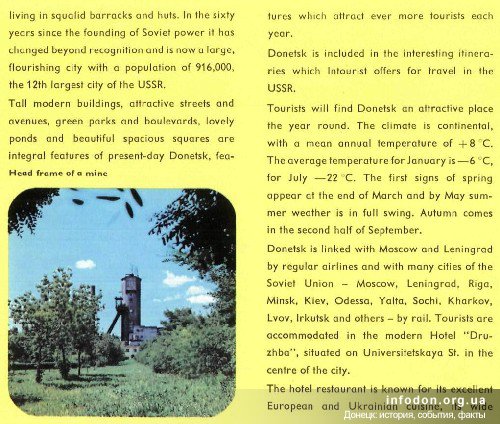 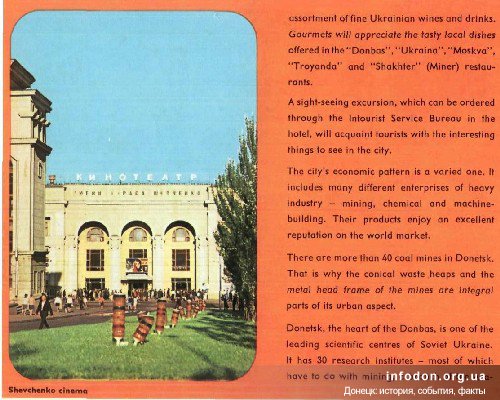 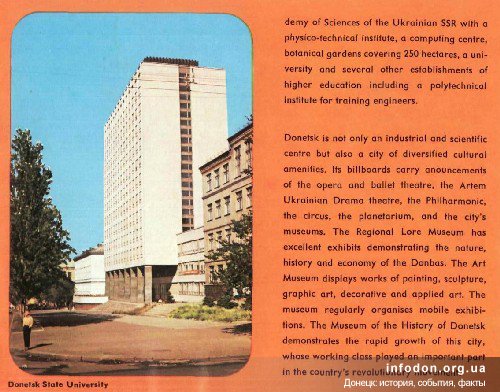 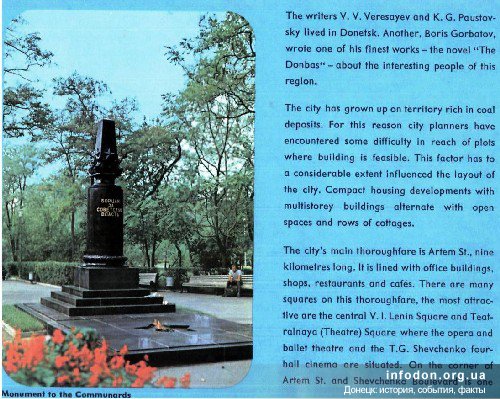 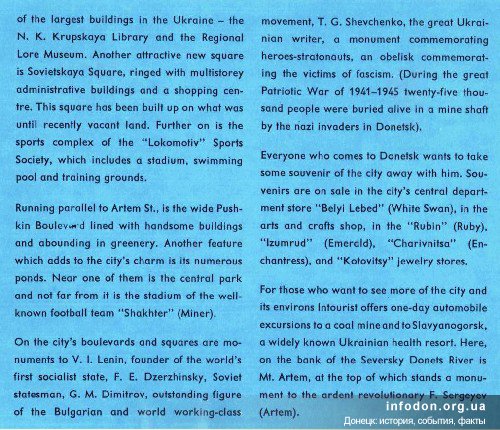 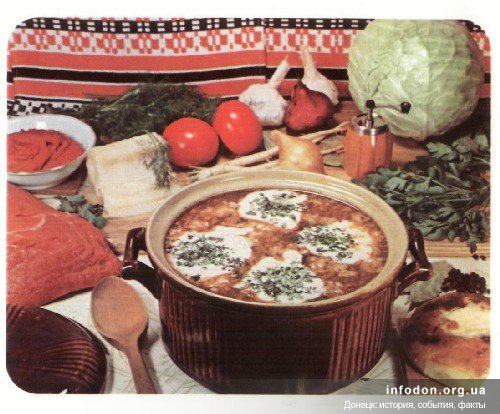 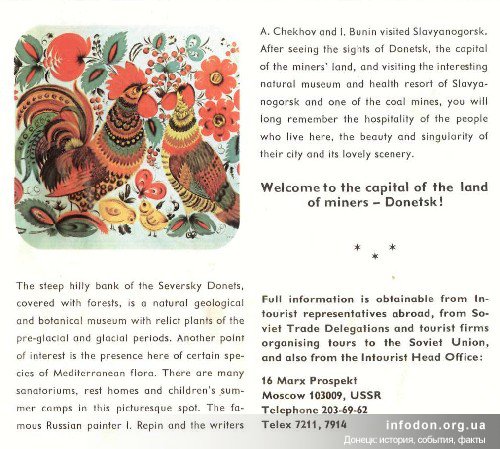 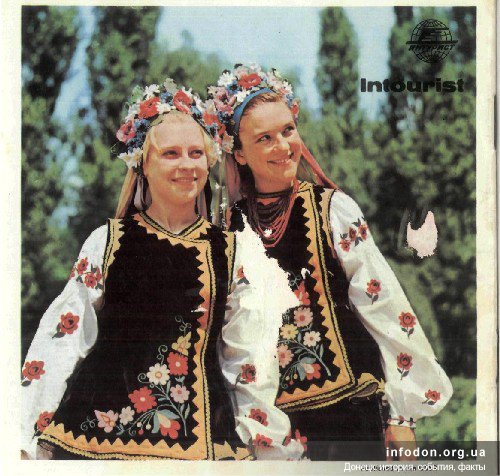 In the southeastern part of the Ukrainian Soviet Socialist Republic, one of the 15 republics of the Soviet Union, is the region known the world over for its rich coal deposits — the Donbas or Donetsk Basin, often called the country’s stokehold. There is good reason for this since one-third of a ton of coke produced in the USSR comes from the Donbas. This region has become a centre of many branches of industry that look far ahead into the future.

Nature has endowed this part of the Soviet Union with untold mineral riches, fertile steppe black soil, a dry, warm climate. Conical waste heaps near coal mines, factory buildings plus fields of golden wheat, sunflowers and maize, truck gardens and melon patches are all components of the Donbas landscape.

The centre of this rich mining region, its heart and brain, is the city of Donetsk, administrative centre of the region, a city of miners, metallurgists, and chemists. Many of the world’s large cities needed several centuries to reach their present growth while the centre of the Donbas has become a large city within several decades.

Before the Great October Socialist Revolution in 1917 Donetsk was a small mining town called Yuzovka, with a population of 50,000 most of whom were miners and metal workers living in squalid barracks and huts. In the sixty years since the founding of Soviet power it has changed beyond recognition and is now a large, flourishing city with a population of 916.000, the 12th largest city of the USSR. Tall modern buildings, attractive streets and avenues, green parks and boulevards, lovely ponds and beautiful spacious squares are integral features of present-day Donetsk, fea-Head frame of a mine tures which attract ever more tourists each year.

Donetsk is included in the interesting itineraries which Intourist offers for travel in the USSR. Tourists will find Donetsk an attractive place the year round. The climate is continental, with a mean annual temperature of + 8 C. The average temperature for January is —6 C, for July —22 C. The first signs of spring appear at the end of March and by May summer weather is in full swing. Autumn comes in the second half of September. Donetsk is linked with Moscow and Leningrad by regular airlines and with many cities of the Soviet Union — Moscow, Leningrad, Riga, Minsk, Kiev, Odessa, Yalta, Sochi, Kharkov, Lvov, Irkutsk and others — by rail. Tourists are accommodated in the modern Hotel «Dru-zhba», situated on Universitetskaya St. in the centre of the city. The hotel restaurant is known for its excellent European and Ukrainian cuisine, its wide assortment of fine Ukrainian wines and drinks. Gourmets will appreciate the tasty local dishes offered in the»Donbas», «Ukraine»,»Moskva», «Troyanda» and «Shakhter» (Miner) restaurants. A sight-seeing excursion, which can be ordered through the Intourist Service Bureau in the hotel, will acquaint tourists with the interesting things to see in the city.

The city’s economic pattern is a varied one. It includes many different enterprises of heavy industry — mining, chemical and machine-building. Their products enjoy an excellent reputation on the world market.

There are more than 40 coal mines in Donetsk. That is why the conical waste heaps and the metal head frame of the mines are integral parts of its urban aspect. Donetsk, the heart of the Donbas. is one of the leading scientific centres of Soviet Ukraine. It has 30 research institutes — most of which have to do with mining, a branch of the Academy of Sciences of the Ukrainian SSR with a physico-technical institute, a computing centre, botanical gardens covering 250 hectares, a university and several other establishments of higher education including a polytechnical institute for training engineers. Donetsk is not only an industrial and scientific centre but also a city of diversified cultural amenities. Its billboards carry anouncements of the opera and ballet theatre, the Artem Ukrainian Drama theatre, the Philharmonic, the circus, the planetarium, and the city’s museums. The Regional Lore Museum has excellent exhibits demonstrating the nature, history and economy of the Donbas. The Art Museum displays works of painting, sculpture, graphic art, decorative and applied art. The museum regularly organises mobile exhibitions. The Museum of the History of Donetsk demonstrates the rapid growth of this city, whose working class played an important part in the country’s revolutionary movement.

The writers V. V. Veresayev and K. G. Paustov-sky lived in Donetsk. Another, Boris Gorbatov, wrote one of his finest works — the novel «The Donbas» — about the interesting people of this region.

The city has grown up on territory rich in coal deposits. For this reason city planners have encountered some difficulty in reach of plots where building is feasible. This factor has to a considerable extent influenced the layout of the city. Compact housing developments with multistorey buildings alternate with open spaces and rows of cottages.

The city’s main thoroughfare is Artem St., nine kilometres long. It is lined with office buildings, shops, restaurants and cafes. There are many squares on this thoroughfare, the most attractive are the central V. I. Lenin Square and Teat-ralnaya (Theatre) Square where the opera and ballet theatre and the T.G. Shevchenko four-hall cinema are situated. On the corner of Artem St. and Shevchenko Boulevard is one of the largest buildings in the Ukraine — the N. K. Krupskaya Library and the Regional Lore Museum. Another attractive new square is Sovietskaya Square, ringed with multistorey administrative buildings and a shopping centre. This square has been built up on what was until recently vacant land. Further on is the sports complex of the «Lokomotiv» Sports Society, which includes a stadium, swimming pool and training grounds.

Running parallel to Artem St., is the wide Pushkin Boulevv«-d lined with handsome buildings and abounding in greenery. Another feature which adds to the city’s charm is its numerous ponds. Near one of them is the central park and not far from it is the stadium of the well-known football team «Shakhter» (Miner).

On the city’s boulevards and squares are monuments to V. I. Lenin, founder of the world’s first socialist state, F. E. Dzerzhinsky, Soviet statesman, G. M. Dimitrov, outstanding figure of the Bulgarian and world working-class movement, T. G. Shevchenko, the great Ukranian writer, a monument commemorating heroes-stratonauts, an obelisk commemorating the victims of fascism. (During the great Patriotic War of 1941–1945 twenty-five thousand people were buried alive in a mine shaft by the nazi invaders in Donetsk).

Everyone who comes to Donetsk wants to take some souvenir of the city away with him. Souvenirs are on sale in the city’s central department store «Belyi Lebed» (White Swan), in the arts and crafts shop, in the «Rubin» (Ruby), «Izumrud» (Emerald), «Charivnitsa» (Enchantress), and «Kotovitsy» jewelry stores.

For those who want to see more of the city and its environs Intourist offers one-day automobile excursions to a coal mineandtoSlavyanogorsk, a widely known Ukrainian health resort. Here, on the bank of the Seversky Donets River is Mt. Artem, at the top of which stands a monument to the ardent revolutionary F. Sergeyev (Artem).

The steep hilly bank of the Seversky Donets, covered with forests, is a natural geological and botanical museum with relict plants of the pre-glacial and glacial periods. Another point of interest is the presence here of certain species of Mediterranean flora. There are many sanatoriums, rest homes and children’s summer camps in this picturesque spot. The famous Russian painter I. Repin and the writers A. Chekhov and I. Bunin visited Slavyanogorsk. After seeing the sights of Donetsk, the capital of the miners’ land, and visiting the interesting natural museum and health resort of Slavyanogorsk and one of the coal mines, you will long remember the hospitality of the people who live here, the beauty and singularity of their city and its lovely scenery.

Welcome to the capital of the land of miners — Donetsk!

Full information is obtainable from In-tourist representatives abroad, from Soviet Trade Delegations and tourist firms organising tours to the Soviet Union, and also from the Intourist Head Office:

Complete the form below to register.